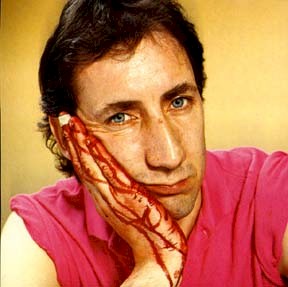 “I bash away at my guitar as though it were a veal escallop I’m trying to thin down,” says Pete Townshend. “I break my nails, I tear flesh from my fingers. I make minor cuts. Then I swing my arm at high speed, and all the blood rushes to the tips of my fingers and pours out profusely under the centrifugal force. My hand always bleeds, even today. But now I have a spray that stops the bleeding and the pain immediately.”
In the spring of 1980, Annie Leibovitz traveled with the Who for a few days and readied a studio around the corner from one of the shows in Oakland, California. The idea, Townshend remembers, was to have him arrive “drenched in sweat and still shaking from the exertion of the gig.” But once Leibovitz noticed his bleeding hand, she became transfixed.

“By the time we got to start taking pictures, the blood was badly congealed,” says Townshend. “Annie got me to swing my arm afresh to generate more blood. Then she actually found some fake blood and added a little to create the runny effect. But I have to say, my hand was a fucking mess before she started to embellish it.”

The Who were wrapping up their second world tour since drummer Keith Moon had passed away two years prior. They were also coming off one of the most tragic events in the band’s history: the deaths of eleven fans at Cincinnati’s Riverfront Coliseum in late 1979. “I was drinking a fair bit at the time,” says Townshend. “By 1980, I was also doing a bit of cocaine every now and then. I was often very happy and content on a rock & roll tour. Where my head was at felt like a real rock & roll condition.”

Leibovitz says that her original idea was to have Townshend do his legendary guitar-smashing routine and some airborne leaps. “The hand was just an afterthought,” she says. “It was just to show that he beats himself up when he plays. What’s so beautiful about the Townshends and the Dylans is, we rarely got to see who they were. And that made them at some level more interesting.”

Says Townshend, “I loved how that photo turned out. I look like someone from Fight Club. Annie was already a great artist. I was honored to work with her. It’s incredible I’m still here, that Rolling Stone still writes about real music and that Annie is now properly recognized by both cool and art establishments in the States and around the world.”